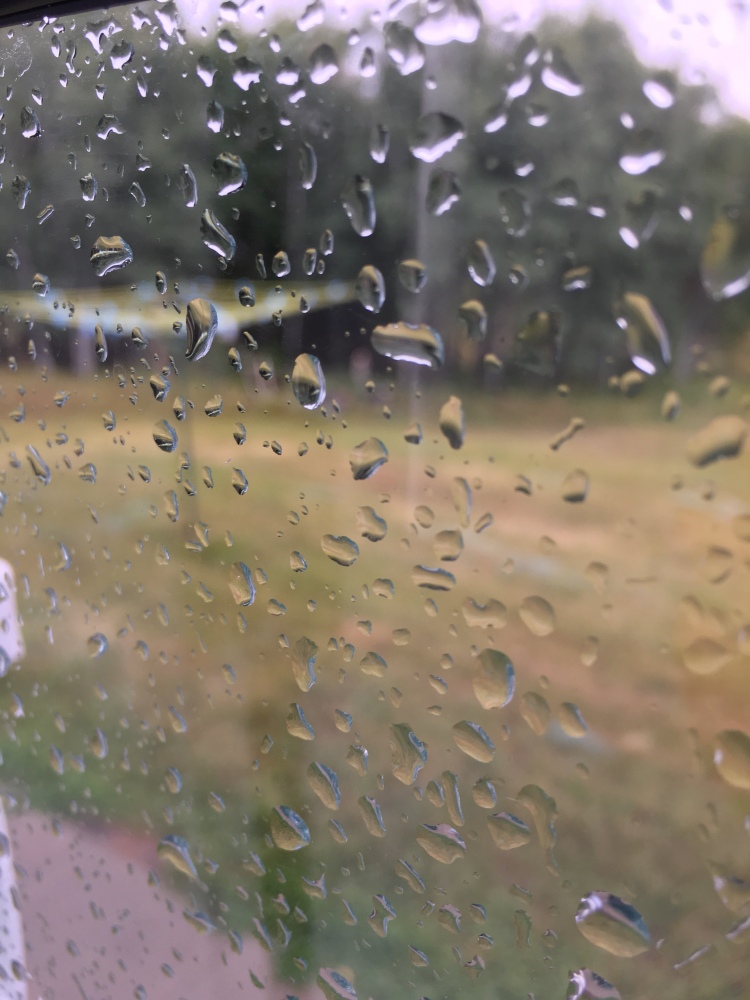 Well, it’s been a full six weeks since I last wrote. Can you say procrastination? So much has happened but I think I’ll just concentrate the unbelievably god awful weather.

Fall is usually my favourite season. The whole going back to school thing–new year, new note books, new crayons–a do over. The weather is cooler but not cold, air is fresh not icky sticky hot. Sweater weather.

We had horses growing up and my father and I rode all the time. Fall was harvest time, and the fields were opened up to us once again. Rape seed (now called by its more politically correct name, canola) fields were the best, with the hollow reedy stalks ringing like bells as the horses hooves swept thru them at a canter.

Then as I began to garden myself, fall was my harvest time. In the 25ish years that I’ve been gardening here at the farm I’ve noticed a real change in the weather patterns. Slightly milder springs so I’m able to plant earlier and earlier every year and much much longer falls, with the first killing frosts pushed farther and farther back into September then October. My corn never used the ripen fully, though I kept trying, growing the same short season sweet corn variety every year. Extra early super sweet. A real tasty corn if it matured before it froze. The early years saw frosts hit the garden in mid August. I would set up a tall sprinkler and if I timed it right, would begin watering the corn at 5 am as the frost began to fall. The water sometimes froze hard on the leaves but protected the plant underneath. The last few years the frosts weren’t coming till late into September and a couple good years saw no frost into October. This year broke the pattern. 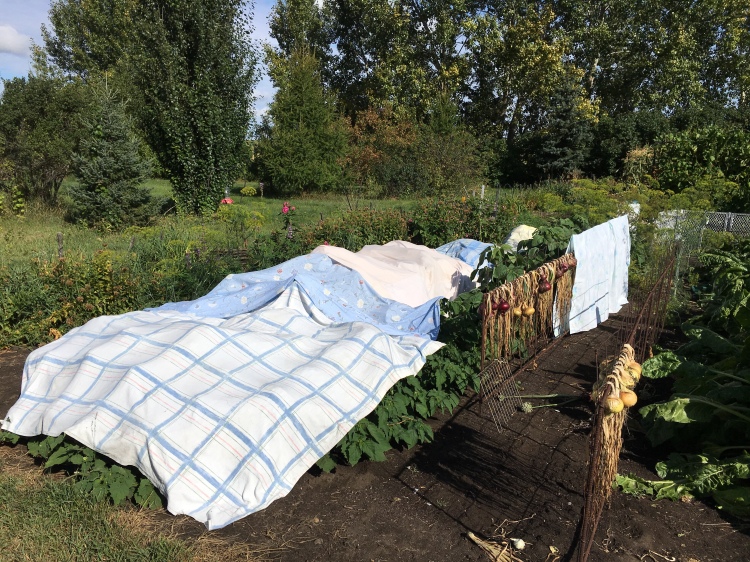 This was August 28. I had to cover everything because of frost!! Then in September this!!

My poor lilac was kissing the ground, crushed by the heavy wet snow. And in the garden… 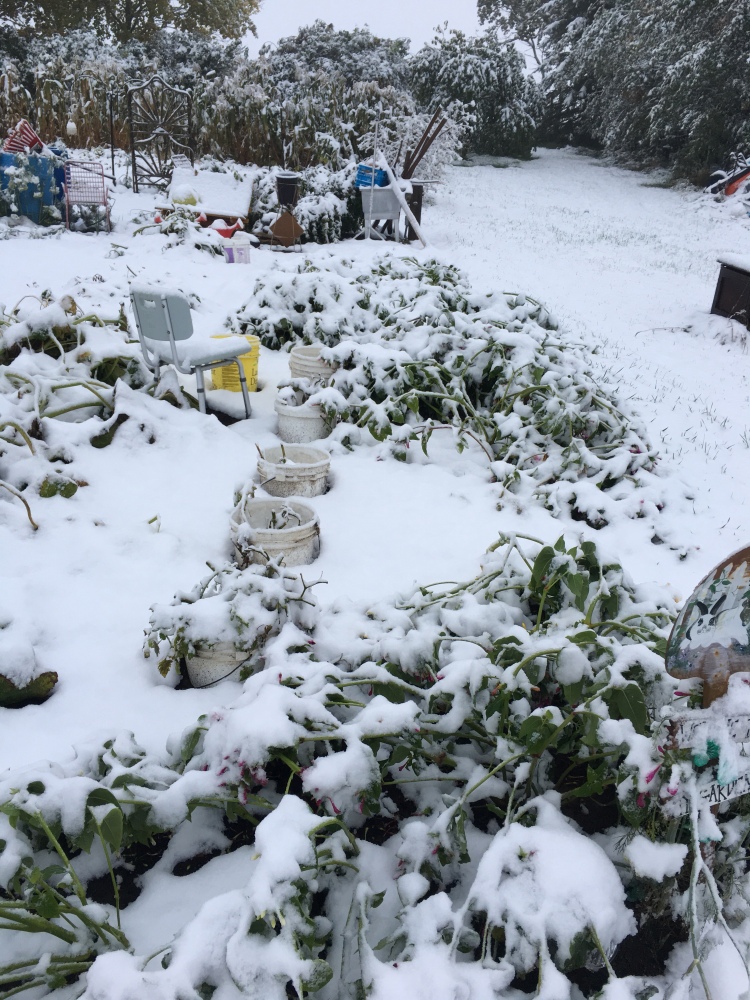 These are my long keeper tomatoes, hence the green green color. They ripen from the inside out and are supposed to keep for months. We’ll see. My mother grew these and one year we were eating garden tomatoes past Christmas. Anything to avoid the horrible cardboard tomatoes in the store.

As I write this I can hear the early morning goose hunters shooting (it’s 7ish in the morning) and the geese are rather raucously protesting in the fields. Peas were grown in the field north of me and they love eating peas. 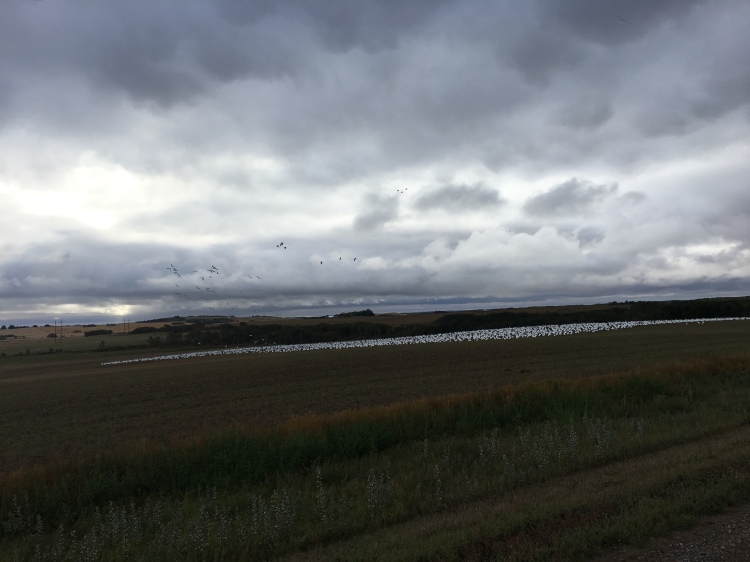 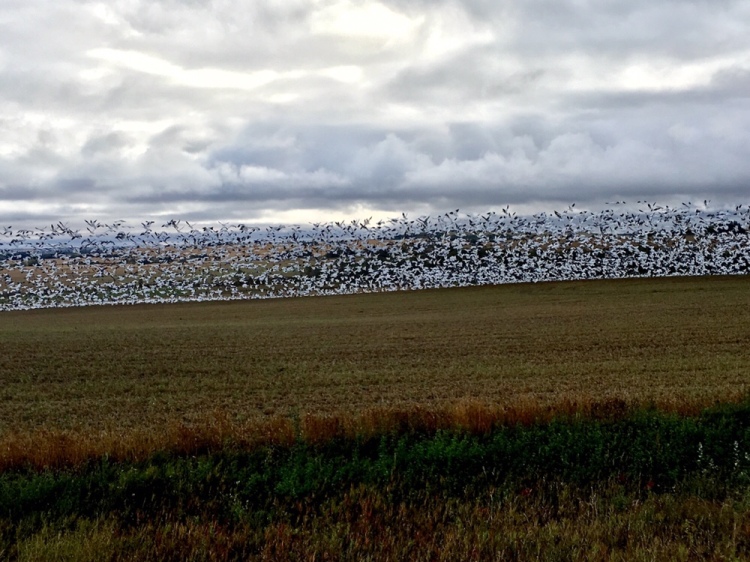 These white ones are snow geese. They are as confused as everyone else with the strange weather we’ve been having. The snow has melted but it’s unseasonably cold with real killing frosts the past few days. A mini ice age is supposed to be coming and I can well believe it.

Red sky in the morning, Shepherd take warning… buckle up, it’s going to be a crazy winter.