So here I am in Uppsala. I came thru here last month. I remember thinking how far I’d come. Ha!! I’m hoping to make it home tomorrow. 1546 k. Sixteen hours driving but I know I won’t have to look for a place to camp. I’d actually hoped to be a couple hours further down the road but there’s a few points where gas service is practically none existent. Like about two hours either side of Uppsala. I had filled at the station going thru. It’s where I had lunch and that wonderful butter tart. But tonight it was closed. There was a Korean family there looking for gas too. I’m not sure what they did. I had passed a nice little campground before the gas station and I thought, I should stay there. But then I thought how long the drive will be tomorrow, so I should fuel and keep going another hour or two. In the end I had to turn around and come back to it.

Now this morning I left Pancake Bay. I knew I needed gas but there just wasn’t any stations. So I kept driving and driving. OMG then I got into this damn National Park. And no gas stations. Then my gas light come on. Piss damn fart. What to do?!? I just kept driving slow and steady. I passed a sign that said Wawa 60k. I’ll never make it I thought. Up steep hills. Coast down the other side. Ad infinitum. I’ll never make it.

I must seriously have been on fumes. There was Wawa. Look, a gas station. I’m just about to pull off–shit, it’s all boarded up. Come on Betsy you can do it.!! Then a bit farther. YES!! A gas station. OMG will that damn truck never move?!?

But at least if I ran out a few of us could push the truck to the pump. How much a litre?!? $1.369?? So I took 30l thinking there must be another station in town that doesn’t gouge idiots like me who come out of the National Park on empty. Yes there was. One cent less 😳

I stopped for lunch at the tourist info place.

They had lots of grass and picnic tables but there was some kind of event happening across the highway with screaming engines. So we didn’t stay long. I did try one of the butter tarts I got yesterday at the French bakery. It wasn’t so much a butter tart as it was a tart au sucre with raisins. 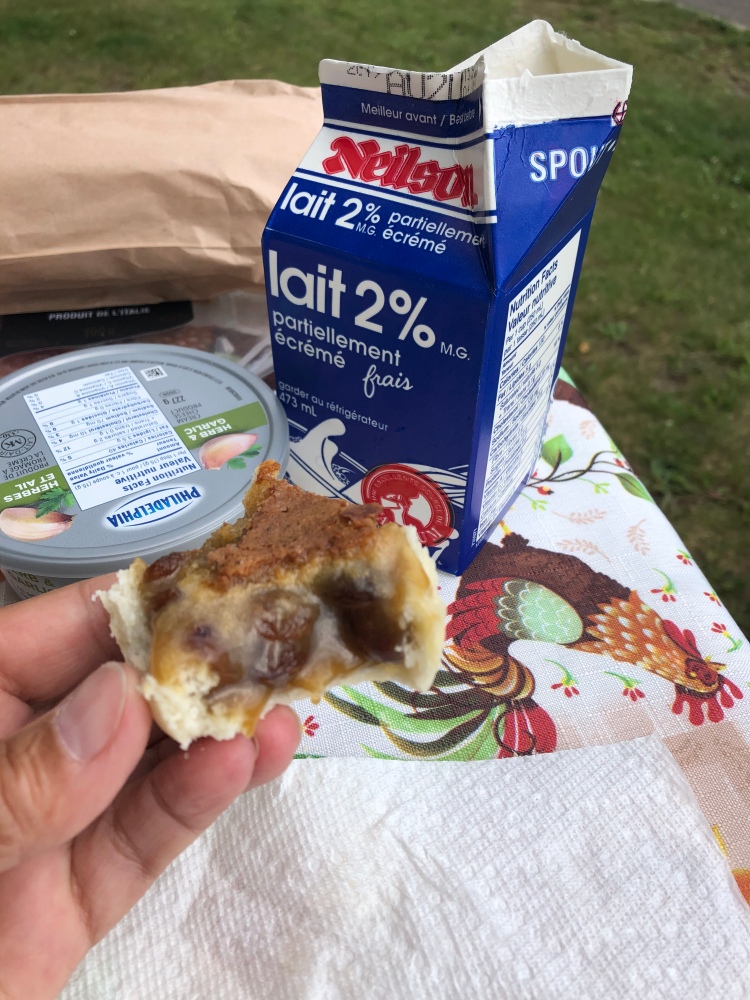 Chock full of raisins, just the way I like, but the crust was too short and the filling too sweet. There was no vinegar or lemon juice to act as a foil for the sweetness. I am actually surprised at how few butter tarts I ran into in the maritimes. I thought they’d be everywhere but maybe it’s just an Ontario thing. And a prairie thing.

So anyway, lots of driving today. And still less kilometres than my first day. It would have been nice to get a couple hundred more over with this evening but it just wasn’t going to happen. I could have tried my luck but running out a fuel at 10 in the morning on a fairly well traveled highway isn’t the same as running out at 10 pm, in the dark with one tail light missing.

My little campground is quite nice. On a little lake. 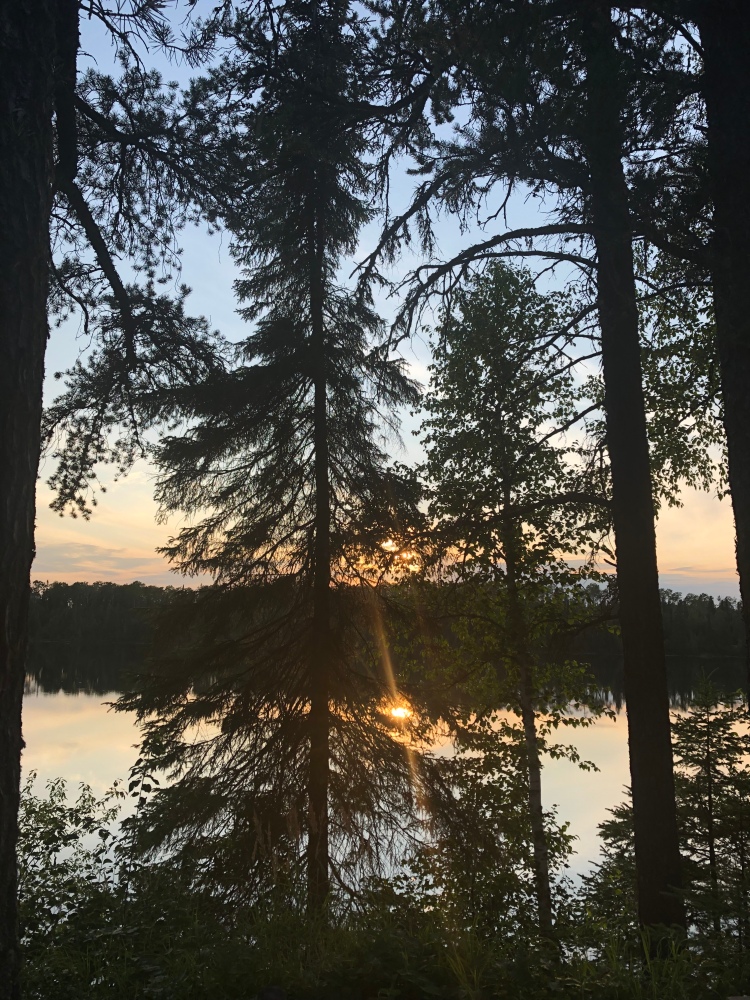 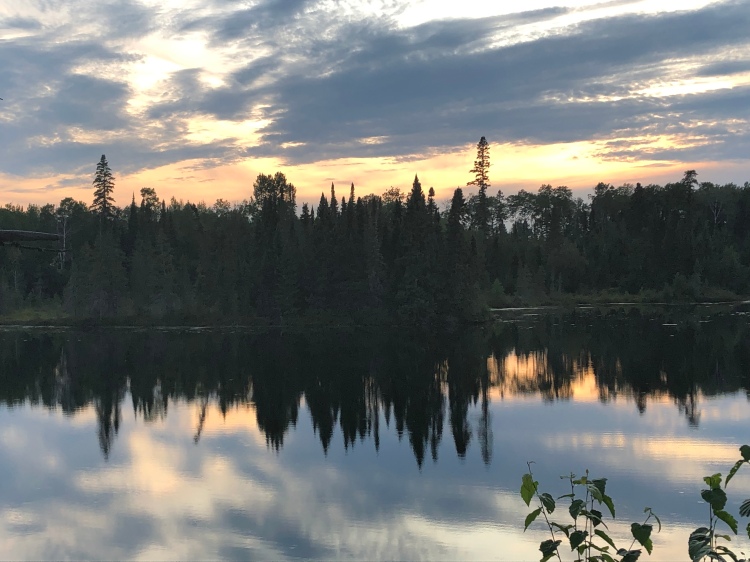 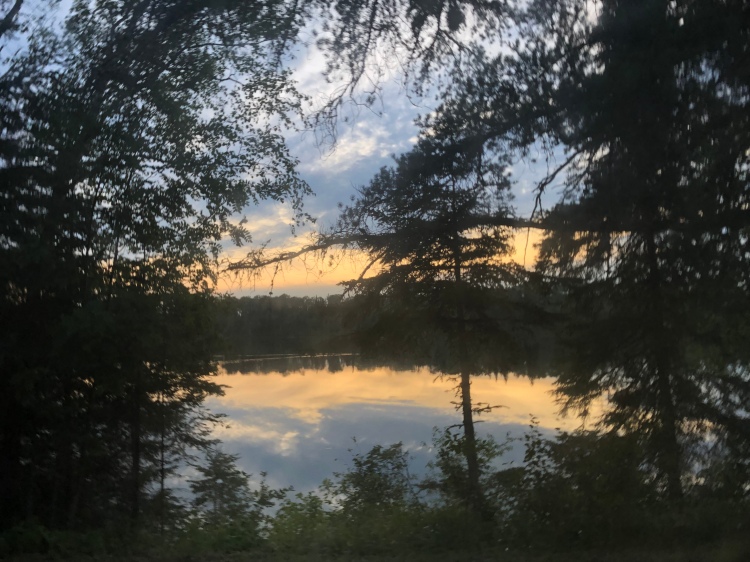 There’s a group of guys watching sports with a tv in the back of a van and all their chairs pulled up around the back of it.

I walked the dog around and they all shouted hello and made small talk. A father and son duo were out walking their dogs too, a husky and a little pug cross and we all stood around visiting for a bit. But the mozzies were coming out and I want to get an early start. They all seem to think the gas station will be open in the morning. I sure hope so. Good night.